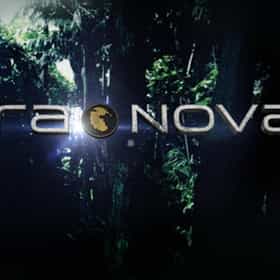 Terra Nova is an American science fiction drama television series. It premiered on September 26, 2011 with a two-hour premiere, and concluded on December 19, 2011 with a two-hour, two-episode finale. The series follows the Shannon family as they travel 85 million years into the past to an Earth of a parallel universe. The series is based on an idea by British writer Kelly Marcel. On March 5, 2012, Fox announced that it would end the series. ... more on Wikipedia

Terra Nova is ranked on...

#108 of 154 The All-Time Greatest TV Pilots 230.6k VOTES The greatest TV pilots of all-time are single episodes of television that introduced us to what would soon be iconic charact...
#27 of 128 Canceled Shows We'd Most Like to See as Movies 204.9k VOTES This list of canceled shows we'd like to see as movies includes a lot of huge cult favorites. Obviously this list isn't comp...
#37 of 119 The Best TV Shows That Never Got a Real Finale 64.6k VOTES List of the best TV shows that never got a real finale, ranked by how much fans miss them. The greatest cancelled television...
#80 of 150 The Best Action-Adventure TV Shows 39.7k VOTES The very best action/adventure shows on television, ranked from best to worst. This list of the greatest in your face explos...
#53 of 74 The Most Exciting Sci-Fi Series Ever Made 3k VOTES The top sci-fi TV shows ever aired are some of the most exciting and thought-provoking to watch on television, but which is ...
#18 of 99 The Greatest TV Shows Set in the Future 2k VOTES Blast forward in time and help rank the best TV shows set in the future. Since the early days of television, futuristic them...
#74 of 103 The Best Action TV Shows Of All Time 25.9k VOTES The very best action shows on television, ranked from best to worst. Popular action TV shows have been a staple of televisio...
#16 of 39 The Best Time Travel TV Shows, Ranked 3.9k VOTES Time travel shows tap into the viewer's wildest fantasies. Imagine if you could go back in time to undo a past tragedy, or&n...
#3 of 32 The Greatest TV Shows About Dinosaurs 364 VOTES Although we'd probably feel differently if we had to share the planet with them, no one's really ever hated a dinosaur. From...
#13 of 52 The Greatest Dystopian TV Shows 4.6k VOTES Across all types of sci-fi, the one type that seems to permeate the genre the most is dystopian fiction. The concept of a fu...
#18 of 56 The Greatest Sci Fi Shows That Are Totally Dramatic 1.9k VOTES The greatest television dramas tend to break the mold - and adding a dose of scifi intrigue is a surefire way to get viewe...

Terra Nova is also found on...