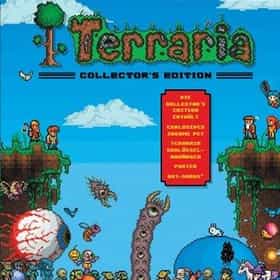 Terraria is an action-adventure sandbox indie video game series, developed by game studio Re-Logic and released on Microsoft Windows, Xbox Live, PlayStation Network, Windows Phone, Android, and iOS. The game features exploration, crafting, construction, and combat with a variety of creatures in a randomly generated 2D world. Originally released for Microsoft Windows on May 16, 2011. The game is estimated to have sold about 50,000 copies during its first day of release, with over 17,000 players online at the same time during the first day's peak. 200,000 copies of the game were sold, making it the top-selling game on Steam for the week, ahead of The Witcher 2 and Portal 2. It remained ... more on Wikipedia

Terraria is ranked on...