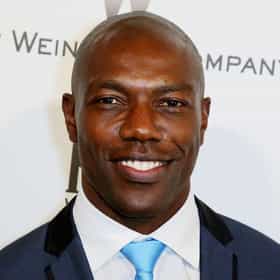 Terrell Eldorado Owens (; born December 7, 1973), popularly known by his initials, T.O., is a former American football wide receiver who played in the National Football League (NFL) for 16 seasons. A six-time Pro Bowl selection and five-time first-team All-Pro, Owens holds or shares several NFL records. He ranks third in career receiving yards at 15,934 and third in receiving touchdowns at 153. After playing college football and basketball at the University of Tennessee at Chattanooga, Owens was selected in the third round of the 1996 NFL Draft by the San Francisco 49ers. Owens was a member of the team for seven seasons until he was traded to the Philadelphia Eagles in 2004 following ... more on Wikipedia

Terrell Owens is ranked on...

Terrell Owens is also found on...