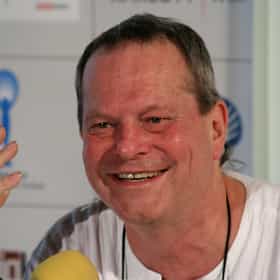 Terrence Vance Gilliam (; born 22 November 1940) is an American-born British screenwriter, film director, animator, actor, comedian and former member of the Monty Python comedy troupe. Gilliam has directed 13 feature films, including Time Bandits (1981), Brazil (1985), The Adventures of Baron Munchausen (1988), The Fisher King (1991), 12 Monkeys (1995), Fear and Loathing in Las Vegas (1998), The Brothers Grimm (2005), Tideland (2005), and The Imaginarium of Doctor Parnassus (2009). The only "Python" not born in Britain, he became a naturalised British subject in 1968 and formally renounced his American citizenship in 2006. Gilliam was born in Minnesota, but spent his high ... more on Wikipedia

Terry Gilliam is ranked on...

#174 of 179 The Best Living American Actors 268.6k VOTES It takes a lot to make a movie great. There has to be excellent writing, production, direction, editing, and of course, acti...
#190 of 362 The Funniest People of All Time 876.4k VOTES The funniest people of all time are a mix of actors, comedians, and even a few people who probably didn't start off trying t...
#40 of 223 The Greatest Living Directors, Ranked 84.9k VOTES List of the best living filmmakers (though not necessarily still actively making films.) When discussing the finest director...
#15 of 122 The Best Comedy Directors in Film History 14.4k VOTES Titans of comedy! These kings of clowning are the best comedy directors ever to make side-splitting movies. This list includ...
#186 of 313 Famous People Most Likely to Live to 100 13.5k VOTES Sometimes, age really is just a number. But these healthy old celebrities seem to be defying time like no others. These clas...
#777 of 1,472 The Greatest Minds of All Time 739.9k VOTES List of the Greatest Minds of All Time, throughout history. This list represents the most influential thinkers across variou...
#33 of 64 The Most Iconoclastic Directors in Film History 1.6k VOTES What does it mean to be iconoclastic? In its rawest sense, it means to break the rules. To be an iconoclastic artist, one wo...
#21 of 51 Who Should Direct the New Star Wars Films? 8.5k VOTES It was announced that Disney has bought Lucasfilm for 4.05 billion dollars. Not only that, but they have also stated that th...
Famous Scorpio Male Celebrities 29.1k VIEWS Driven by their passions, resourceful and fiercely independent, the personality of a Scorpio seems tailor-made for celebrity...
Hunter S. Thompson's Iconic and Famous Friends 16.5k VIEWS They say you can judge a man by his five closest friends, that you are the company you keep. To say that the company Hu...
Celebrities Who Are Secret Geeks 56k VIEWS List of Celebrities Who Are Secret Geeks ranked by fame and popularity. It has never been cooler to be a geek and some of Ho...
27 Celebrities Who Are Expats 23.2k VIEWS List of Famous Expats ranked by fame and popularity. An expat or expatriate is an individual residing in a country other tha...
Famous People Named Terry 18.6k VIEWS If your name is Terry, then you're in some great company. Here's our list of the most famous people named Terry, including p...
16 Rare and Peculiar Things Your Favorite Celebrities Own 5.1k VIEWS One of the major perks of being a celebrity is that you get to have so much cool stuff. Whether it’s a statue of a disgraced...

Terry Gilliam is also found on...