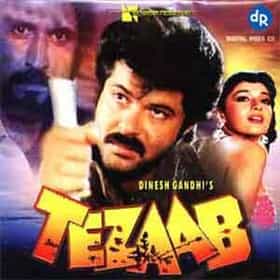 Tezaab, released on 11 November 1988, is an Indian Hindi movie. The film gave actress Madhuri Dixit her first big break, making her an over night star. This also reaffirmed Anil Kapoor's star status, after a successful Mr India. The film was produced and directed by N. Chandra. The music is by Laxmikant-Pyarelal. Tezaab is known for the song "Ek Do Teen," which was a chart success. It ran in theatres for more than 50 weeks becoming a golden jubilee, and it was the highest blockbuster at the box office for the year 1988 in Bollywood.With Tezaab, N Chandra scored a box office hat-trick at his previous hits, Ankush and Pratighaat 1987. The film was also critically aclaimed and ... more on Wikipedia

Tezaab is ranked on...

Tezaab is also found on...