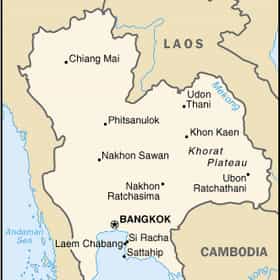 Thailand, officially the Kingdom of Thailand, formerly known as Siam, is a country at the centre of the Indochina peninsula in Southeast Asia. It is bordered to the north by Burma and Laos, to the east by Laos and Cambodia, to the south by the Gulf of Thailand and Malaysia, and to the west by the Andaman Sea and the southern extremity of Burma. Its maritime boundaries include Vietnam in the Gulf of Thailand to the southeast, and Indonesia and India on the Andaman Sea to the southwest. Thailand is a monarchy headed by King Bhumibol Adulyadej, Rama IX, and governed by a military junta that took power in May 2014. The king is the ninth of the House of Chakri, and has reigned since 1946 as ... more on Wikipedia

Thailand is ranked on...

Thailand is also found on...