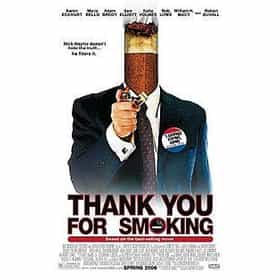 Thank You for Smoking

Thank You for Smoking is a 2005 comedy-drama film written and directed by Jason Reitman and starring Aaron Eckhart, based on the 1994 satirical novel of the same name by Christopher Buckley. It follows the efforts of Big Tobacco's chief spokesman, Nick Naylor, who lobbies on behalf of cigarettes using heavy spin tactics while also trying to remain a role model for his 12-year-old son. Maria Bello, Adam Brody, Sam Elliott, Katie Holmes, Rob Lowe, William H. Macy, J.K. Simmons and Robert Duvall appear in supporting roles. The film was released in a limited run on March 17, 2006, and had a wide release on April 14. As of 2007, the film has grossed a total of more than $39 million ... more on Wikipedia

Thank You for Smoking is ranked on...

Thank You for Smoking is also found on...