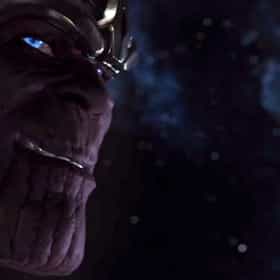 Thanos is a fictional supervillain that has appeared in comic books published by Marvel Comics. The character first appeared in Iron Man #55 and was created by writer-artist Jim Starlin. Debuting in the Bronze Age of Comic Books, the character has been featured in over four decades of Marvel continuity and a self-titled series. Thanos has appeared in other Marvel-endorsed products, including animated television series, arcade and video games, toys and trading cards. Thanos appears in the Marvel Cinematic Universe in a non-speaking cameo at the end of the 2012 film The Avengers, and Josh Brolin portrays him in 2014's Guardians of the Galaxy and will reprise the role for future films. ... more on Wikipedia

Red Hulk
There's Already A Future Of The Marvel Universe Where Thanos Has Won (And It Is Awesome!) 844.1k views Long-time comic book readers have no doubt visited a Marvel alternate universe or “possible future” in their time - whether ...
Just How Strong Is Thanos Really? 102.4k views In the run-up to Infinity War, Avengers and audiences alike are majorly concerned with the potential destruction that could ...
10 Comic Book Characters You Won’t Believe Defeated Galactus 91.5k views Galactus was the first Big Bad of the Marvel Universe. His whole shtick was that – because he is a force of nature – the Dev...
Badass Moments From The Comics That Show Thanos Is Stronger Than The Hulk 3.1k votes Thanos may be one of the most horrifying and omnipotent villains in the Marvel Universe, but he is also kind of a badass. Th...
Thanos's Evil Plan Is Very, Very Different In The Comics 24.3k views Fans of the Marvel Cinematic Universe have known since 2012’s The Avengers that Thanos is coming, but one important question...
Times Thanos And The Good Guys Actually Teamed Up 31k views No Marvel Comics character has seen their profile increase more over the past few years than Thanos the Mad Titan - who went...
13+ Fascinating Things Most Casual Fans Don't Know About Thanos 301.9k views The Marvel Cinematic Universe officially got its start in 2008 with the release of Iron Man, but it didn’t really get going ...
How The Punisher Became The Cosmic Ghost Rider And Why He's Road-Tripping With A Baby Thanos 166.5k views Anyone browsing the newer solicitations of Marvel Comics might find themselves asking an important question: “Who is the Cos...
The Best Storylines That Feature Thanos 51 votes Thanks to the massive success of Avengers: Infinity War and Avengers: Endgame, the world knows of the threat that is Thanos!...
Fan Art Of Thanos Just Chillin' 897 votes So you think you know what Thanos is really like? What you know from the pages and the screen doesn't paint the full picture...
In Defense Of Thanos: Why Fans Are Rooting For The Mad Titan 1.4k votes In intense online discussions of the Avengers film franchise, one topical thread seems to come up again and again: the idea ...
All The Characters Who Wore The Infinity Gauntlet Besides Thanos 697.4k views Although most frequently associated with Thanos the Mad Titan, the villain of Avengers: Infinity War, there are a number of ...
The Best Thanos Quotes 7.4k votes Here are the best Thanos quotes from the Marvel Cinematic Universe. Played by Josh Brolin, Thanos is the main villain in the...
The Marvel Characters Most Likely To Defeat Thanos In The MCU 4.3k votes The ending of Avengers: Infinity War left fans everywhere asking a lot of tough questions. How many well-loved characters ar...

Thanos is ranked on...

#5 of 660 People who voted for Thanos... also upvote Star Wars Franchise on The Best Movies of All Time also upvote Iron Man on The Best Comic Book Superheroes of All Time The Best Comic Book Villains 270.1k VOTES Who are the best comic book villains of all time? This list of top supervillains in comics includes some of the most notorio...
#6 of 961 The Greatest Movie Villains of All Time 1.2M VOTES While some of us tend to despise movie villains, plenty of movie-goers favor some of these antagonists. Whether that's ...
#33 of 55 Characters Who Are Most Worthy Of Lifting Mjolnir 212.2k VOTES Not just anyone can lift Thor's hammer. Thanks to an enchantment by Odin, only one who is worthy can wield it. While wo...
#16 of 194 The Best Characters In The Marvel Cinematic Universe 545.7k VOTES Since the debut of Iron Man in 2008, the Marvel Cinematic Universe has been delivering top-notch superhero movies with some ...
#14 of 25 Who Was The MVP Of 'Avengers: Endgame'? 10.2k VOTES Earning more than $1.2 billion in its first weekend, Avengers: Endgame brought the first 22 films in the Marvel Ci...
#2 of 47 The Best Villains In The Marvel Cinematic Universe 8.8k VOTES The Marvel Cinematic Universe may have its share of awesome heroes, but for every great hero, there’s an equally awesome vil...
#40 of 42 The Best Iron Man Villains Ever 9.8k VOTES List of the most notorious villains from Iron Man's rogues gallery, as ranked by the fans. Iron Man/Tony Stark has a wide ar...
#1 of 54 The Greatest Villains The Guardians of the Galaxy Face 14k VOTES The Guardians of the Galaxy are a rag-tag group of hero misfits that banded together to fight cosmic crime way back in 1969,...
#14 of 29 29 Movie Villains Who Were Probably Right All Along 72.7k VOTES You know the villain as the Big Bad, the truly horrible no-good person who has no redeeming qualities whatsoever. But as man...
#28 of 72 List of Marvel Vs Capcom Characters 5.5k VOTES We compiled a list of all Marvel Vs Capcom characters across every MVC game. Characters in the Marvel Versus Capcom game ser...
#2 of 14 The Most Ruthless Characters In The Marvel Cinematic Universe, Ranked 1.7k VOTES Marvel Studios may be owned by Disney, but the MCU is far from G-rated. There are a lot of dark themes and characters in the...
#2 of 20 The Villains Who Hurt Us The Most Over The 2010s 867 VOTES The 2010s might just have been the “Decade of the Villain.” That period of 10 years brought fans across multiple mediums and...
#36 of 111 The Best Pop Culture Pet Names 18.5k VOTES Looking for a cute pop culture pet name for a new cat, dog, or even bird? Naming a pet is no easy decision, but this list of...
#10 of 28 The Most Terrifying & Scariest Villains In Comics 58.2k VOTES Does the Scarecrow bring the fear out of you? Does the thought of Venom being around you make you cringe? Does Batman's Vict...
#46 of 198 The Greatest Immortal Characters in Fiction 20.6k VOTES Immortality is a common theme in fiction. It often explores many different themes, from what it means to live forever, to ...
#17 of 20 The Greatest Defenders Villains Ever 1k VOTES The Defenders are very much like the Avengers, and as such, share a fair amount of their villains. But The Defenders being s...
#17 of 19 The Wisest Characters In The MCU 297 VOTES They say wisdom is the intersection of emotion and intellect. And what better way to describe the characters of the Marvel C...
#8 of 50 The Best Captain America Villains Ever 5k VOTES List of Captain America's most notorious baddies, ranked by the fans. Captain America is one of Marvel's first superheroes h...
List of All Hulk Villains & Enemies 129.3k VIEWS This is a full list of all Hulk enemies and supervillains that has ever existed. The following Hulk enemy list can be sorted...
The Most Devastating Comic Book Deaths Of The 2010s 10.3k VIEWS There was plenty of tragedy in the decade between 2010 and 2019, both fictional and in the real world, and a fair portion of...
#4 of 33 The Best Eternals Members, Ranked 4k VOTES Here is the full roster of the Marvel Comics superhuman race of cosmic beings, the Eternals. Created by Jack Kirby, the...
Which Marvel Villain Would You Be According To Your Zodiac Sign? 122.2k VIEWS There's no denying it - Zodiac signs are hella fun. There's an astrological symbol for each Justice League member as their i...
#5 of 19 The Best Comic Book Characters Who Have Blue Eyes 215 VOTES There's just something about blue eyes people find captivating. In reality, blue eyes are the result of the stroma of the ir...
#18 of 42 All 'Marvel Ultimate Alliance 3' Characters, Ranked 6.6k VOTES Here is the entire Marvel Ultimate Alliance 3 roster, ranked by gamers everywhere. In the third installment of the series, M...