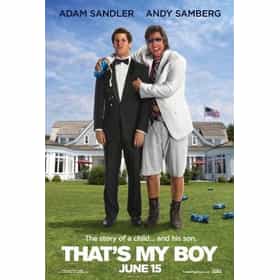 That's My Boy is a 2012 American comedy film starring Adam Sandler and Andy Samberg. The script was written by David Caspe and directed by Sean Anders. The film is about a slacker named Donny Berger who fathered a son with his school teacher. Donny owes $43,000 in back taxes to the IRS and will have to serve a 3-year sentence in prison if he does not pay it off by the end of the weekend, which happens to be his son's wedding weekend. ... more on Wikipedia