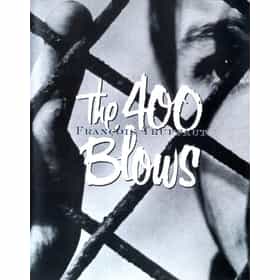 The 400 Blows is a 1959 French drama film, the debut by director François Truffaut; it stars Jean-Pierre Léaud, Albert Rémy, and Claire Maurier. One of the defining films of the French New Wave, it displays many of the characteristic traits of the movement. Written by Truffaut and Marcel Moussy, the film is about Antoine Doinel, a misunderstood adolescent in Paris who is thought by his parents and teachers to be a troublemaker. Filmed on location in Paris and Honfleur, it is the first in a series of five films in which Léaud plays the semi-autobiographical character. The 400 Blows received numerous awards and nominations, including the Cannes Film Festival ... more on Wikipedia

#810 of 1,699 The Most Rewatchable Movies 3.4M VOTES There are some movies that I always stop at and watch if I see them on TV or I can put in the DVD player and watch when I'm ...
#364 of 410 The Best Rainy Day Movies 178k VOTES For many, rainy days are no fun—but it doesn't have to be that way. A great way to spend such days is watching movies, ...
#19 of 46 Every Single Movie On Rotten Tomatoes With 100% Approval, Ranked 46.4k VOTES There are more 100% fresh movies on Rotten Tomatoes than you might think. Sure, some people think Rotten Tomatoes is bad and...
#32 of 139 The Greatest Movies in World Cinema History 6.4k VOTES Hollywood may be the epicenter of the movie business, but many of the best films released each year hail from all over the w...
#59 of 131 The Best Existentialism Movies 5.4k VOTES A list of all the best existentialism movies ever made, many of which are streaming on Netflix and Amazon Prime. For more mo...
#66 of 182 The Best Coming of Age Movies 18.1k VOTES For this list, we're ranking the best coming of age movies of all time, with the help of your votes. The coming of age films...
#39 of 70 The Best Movies About Art & Artists 5k VOTES A list of the best art movies. This is a list not of "art films" but of movies that feature art as a central theme...
Premiere's The Must-Have Hollywood Movies DVD Collection 20.2k VIEWS Premiere's list of the top DVD's a movie-fan must own. These are movies you need to have in your collection if you consider ...
#7 of 67 The Best Jeanne Moreau Movies 418 VOTES List of the best Jeanne Moreau movies, ranked best to worst with movie trailers when available. Jeanne Moreau's highest gros...
#34 of 47 The Best Coming of Age Drama Films 570 VOTES The best coming of age drama movies are capable of truly touching your heart. These films capture the complicated, emotional...