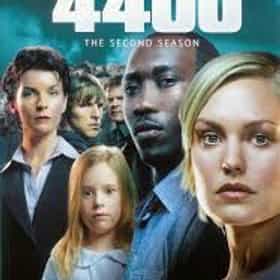 The 4400 is a science fiction TV series produced by CBS Paramount Network Television in association with BSkyB, Renegade 83, and American Zoetrope for USA Network. The show was created and written by Scott Peters and René Echevarria, and it starred Joel Gretsch and Jacqueline McKenzie. The series ran for four seasons from 2004 until its cancellation in 2007. In the pilot episode, an enormous ball of light deposits a group of exactly 4400 people in the Cascade Range foothills near Mount Rainier, Washington. Each of the 4400 had disappeared at various times starting from 1946 in a beam of white light. None of the 4400 have aged from the time of their disappearance. Confused and ... more on Wikipedia

#77 of 322 The Best Sci Fi Television Series of All Time 930.7k VOTES Here is a list of the best sci-fi shows and best sci-fi series of all time, as ranked by hundreds of Ranker voters. Thi...
#539 of 2,286 The Greatest TV Shows Of All Time 1.4M VOTES Choosing the best TV shows of all time means taking into account the best TV dramas, the best TV comedies, the best cartoons...
#64 of 128 Canceled Shows We'd Most Like to See as Movies 204.9k VOTES This list of canceled shows we'd like to see as movies includes a lot of huge cult favorites. Obviously this list isn't comp...
#38 of 119 People who voted for The 4400... also upvote Star Trek Franchise on The Best Movies Based on TV Shows The Best TV Shows That Never Got a Real Finale 64.6k VOTES List of the best TV shows that never got a real finale, ranked by how much fans miss them. The greatest cancelled television...
#81 of 272 The Greatest Supernatural Shows of All Time 454.1k VOTES The very best supernatural shows on television, ranked from best to worst. Popular supernatural TV shows have been a staple ...
#50 of 57 The Most Exciting Sci-Fi Series Ever Made 2.9k VOTES The top sci-fi TV shows ever aired are some of the most exciting and thought-provoking to watch on television, but which is ...
#28 of 61 The Best Sci-Fi Thriller Series Ever Made 2.7k VOTES The best science fiction thriller shows are a perfect storm of futuristic imagination and out-of-this-world tension. The bes...
#29 of 73 The Best Sci-fi Shows On Netflix 8k VOTES Here are the best sci-fi shows streaming now on Netflix. Whether you're looking for shows with space exploration, alien inva...
#25 of 55 The Greatest Sci Fi Shows That Are Totally Dramatic 1.9k VOTES The greatest television dramas tend to break the mold - and adding a dose of scifi intrigue is a surefire way to get viewe...