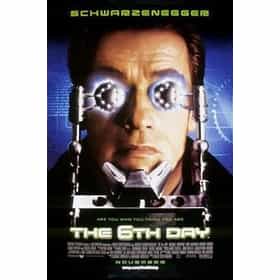 The 6th Day is a 2000 American science fiction film directed by Roger Spottiswoode, and starring Arnold Schwarzenegger as family man Adam Gibson, who is cloned without his knowledge or consent in the future of the year 2015. It was a success at the box office despite mixed reviews from critics, and Schwarzenegger received a salary of $25 million for his role in the film. The film opened at #3 in North America and made $13 million in its opening weekend. The film was also Terry Crews' film debut. ... more on Wikipedia