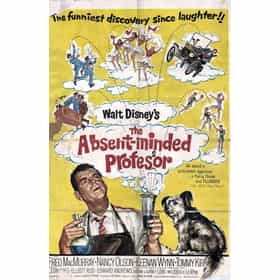 The Absent-Minded Professor is a 1961 American film distributed by Walt Disney Productions based on the short story "A Situation of Gravity" by Samuel W. Taylor. The title character was based in part on Hubert Alyea, a professor emeritus of chemistry at Princeton University, who was known as "Dr. Boom" for his explosive demonstrations. The film stars Fred MacMurray as Professor Ned Brainard. The film was a huge success at the box-office, and two years later became the first Disney film to have a sequel, 1963's Son of Flubber. The original 1961 film was one of the first Disney films to be colorized, and, along with 1959's The Shaggy Dog and 1963's Son of Flubber, it ... more on Wikipedia

The Absent-Minded Professor is ranked on...

#82 of 139 The Best Disney Live-Action Movies 116.8k VOTES What are the best Disney live action movies? While Disney has put out some of the most incredible, memorable animated featur...
#144 of 173 The Best Movies for Families 21.5k VOTES The films on this list of the best movies for families have been ranked by the community as the greatest family films. It ca...
#213 of 312 The Best Movies for Kids 199.4k VOTES If you have kids, you know you are always on the lookout for a movie that they will love and that you can sit through withou...
#15 of 23 Great Movies About Inventors & Innovators 348 VOTES The greatest innovators have not only reshaped the world with their inspired inventions, but they have also served as...
#18 of 33 The Greatest Classic Films the Whole Family Will Love 50.5k VOTES There's nothing like popping up some popcorn, gathering the family on the couch, and enjoying a movie together. The top clas...
#51 of 55 The Best Movies Ever to Come Out in March 4.1k VOTES March is usually a dumping ground for movies that are neither summer blockbusters nor award contenders, but Marches of years...
#327 of 587 The Best Fantasy Movies 904k VOTES A list of the best fantasy movies ever made. This fantasy film list can be sorted by cast, year, director and more. This lis...
#111 of 213 The Best Walt Disney Company Movies List 18.1k VOTES Here are the best Walt Disney Company movies, ranked best to worst, including trailers, genres, and release dates....
#107 of 139 The Funniest Slapstick Movies Ever Made 13.4k VOTES A list of all the best slapstick movies ever made, many of which are streaming on Netflix and Amazon Prime. This slapstick m...
#13 of 87 The Best Sci-Fi Movies of the 1960s 5.8k VOTES The 1960s was an important decade in the development of the science fiction genre. Several major releases helped redefine sc...
#63 of 195 The Best G-Rated Comedies 6.3k VOTES List of G-Rated kids' comedies, ranked from best to worst with movie trailers when available. These comedies are all G-Rated...
#16 of 112 The Best Movies of 1961 2.2k VOTES List of the best movies of 1961, with movie trailers when available. 1961 saw the debut of many historic actors, including...
#25 of 50 The Best Kids Movies of the 1960s 4k VOTES In the 1960s, musicals were king. On this list of the greatest 1960s kids movies, you will see a number of enduringly popula...
#14 of 45 The Best Disney Science Fiction Movies Of All Time 500 VOTES It’s time to determine the best Walt Disney sci-fi movies. Space and far away galaxies are a great backdrop for epic stories...
#23 of 36 The Best 1960s Family Movies 1.7k VOTES The hills are alive with the sound of '60s family movies. Some of the best family films ever made are here on this list of 1...
#4 of 50 The Best Disney Movies Based on Books 2.6k VOTES Walt Disney created Mickey Mouse, but some of his company's most beloved characters come from literature. The best Disney mo...
#16 of 53 The Best G-Rated Science Fiction Movies 571 VOTES List of G-Rated science fiction movies, ranked from best to worst with movie trailers when available. This list takes the be...
#7 of 23 The Best Fantasy Movies of the 1960s 771 VOTES The best 1960s fantasy movies often incorporated some psychedelic style elements into their films. If you're looking for fil...

The Absent-Minded Professor is also found on...