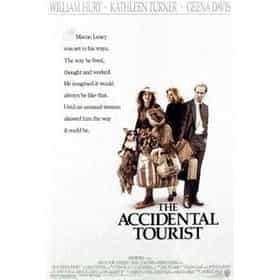 The Accidental Tourist is a 1988 American drama film starring William Hurt, Kathleen Turner, and Geena Davis. It was directed by Lawrence Kasdan and scored by John Williams. The film's screenplay was adapted by Kasdan and Frank Galati from the novel of the same name by Anne Tyler. One of the most acclaimed films of 1988, it was nominated for four Academy Awards, including Best Picture, Best Adapted Screenplay, Best Original Score, and Best Supporting Actress, winning Best Supporting Actress for Davis. ... more on Wikipedia

The Accidental Tourist is ranked on...

#48 of 347 The Best Movies of 1988 12.9k VOTES A list of the best movies of 1988, from light dramas like Bull Durham to action movies like Die Hard.The '80s were a decade ...
#235 of 710 The Best Movies Roger Ebert Gave Four Stars 161.5k VOTES List of movies Roger Ebert gave four stars, ranked best to eh. This is NOT a complete list of all of Roger Ebert's four star...
#48 of 69 The Best Movies About Writers 1.8k VOTES List of movies about writers, as ranked by film critics and fans. Movies about writers are always interesting and filled wit...
#32 of 50 The Best Oscar-Nominated Movies of the '80s 1.1k VOTES De Niro. Hepburn. Winfrey. The biggest movies of the 1980s captured audiences' imaginations thanks to outstanding performanc...
#7 of 35 The Best Kathleen Turner Movies 1.1k VOTES List of the best Kathleen Turner movies, ranked best to worst with movie trailers when available. Kathleen Turner's highest ...

The Accidental Tourist is also found on...