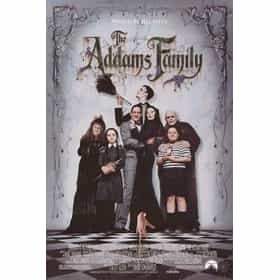 The Addams Family is a 1991 American fantasy comedy film based on the characters from the cartoon of the same name created by cartoonist Charles Addams. The movie was originally developed at Orion Pictures. But due to the studio's financial problems, Paramount Pictures stepped in to complete the film and handled North American distribution, with Orion retaining the international rights. The film debuted in Los Angeles on November 16, 1991. It opened internationally on November 22, 1991, on the same day as An American Tail: Fievel Goes West and Beauty and the Beast and received positive reviews. It was followed by a sequel, Addams Family Values, two years later. ... more on Wikipedia

The Most Messed Up Things That Happen In The 'Addams Family' Movies 852 votes They're creepy, they're kooky, they're altogether ooky, and they’re also the stars of the strangest '90s films. Everyone who...
Hidden Details In The ‘Addams Family’ Movies You May Have Missed 9.7k votes The Addams Family movies are an Easter egg hunter's dream. Not only do they include references to the comic strips of Charle...
'Addams Family' Jokes That Went Right Over Your Sweet, Childish Head 4.3k votes The Addams family loves being creepy, kooky, and altogether ooky. The characters also love making suggestive jokes. Innuendo...
Dark And Morbidly Funny Behind-The-Scenes Stories From The '90s Addams Family Films 230.7k views If you were a kid in the ‘90s, then Barry Sonnenfeld’s Addams Family films were probably rays of moonlight in your life. Whe...

The Addams Family is also found on...