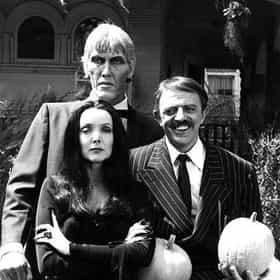 The Addams Family is an American television series based on the characters in Charles Addams' New Yorker cartoons. The 30-minute series was shot in black-and-white and aired for two seasons on ABC from September 18, 1964, to April 8, 1966, for a total of 64 episodes. It is often compared to its CBS rival, The Munsters, which ran for the same two seasons and achieved somewhat higher Nielsen ratings. The show is the first adaptation of the Addams family characters to feature The Addams Family Theme. The Addams Family was originally produced by Filmways, Inc. at General Service Studios in Hollywood, California. Successor company MGM Television now owns the rights to the show. ... more on Wikipedia

Charming And Intriguing Behind-The-Scenes Stories From ‘The Addams Family’ TV Show 8.4k views In fall 1964, ABC debuted a series that introduced viewers to characters that were creepy and kooky, mysterious and spooky, ...