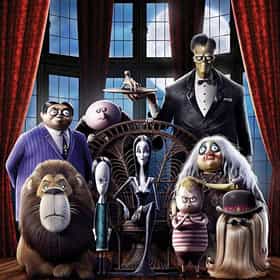 The Addams Family is a 2019 American 3D computer-animated comedy horror film based on The Addams Family comics by Charles Addams. The film is directed by Conrad Vernon and Greg Tiernan, the directors of Sausage Party, and features the voices of Oscar Isaac (Gomez), Charlize Theron (Morticia), Chloë Grace Moretz (Wednesday), Finn Wolfhard (Pugsley), Nick Kroll (Uncle Fester), Bette Midler (Grandmama), and Allison Janney. The Addams family's lives begin to unravel when they face-off against a treacherous, greedy crafty reality-TV host while also preparing for their extended family to arrive for a major celebration. ... more on Wikipedia

Everything We Know About The 2019 Animated 'Addams Family' Movie 10.4k views On October 11, 2019, everyone's favorite creepy, kooky family is coming back to the big screen. The new Addams Family movie ...
The Creepiest, Kookiest Quotes From 'The Addams Family' 418 votes It's time to vote for the best The Addams Family quotes. Anyone familiar with the lyrics to the official theme song knows th...

#248 of 598 The Best Animated Films Ever 970.6k VOTES The best animated movies of all time are an assortment of animated movies that rank among the best movies ever made. Wh...
#74 of 107 The Best Halloween Movies for Kids 30k VOTES Halloween movies for kids include some holiday classics and some newer films that are quickly becoming classics. The best Ha...
#27 of 35 The Best, Funniest Comedy Movie Trailers of 2019 349 VOTES UPDATE: Check out the best comedy movie trailers of 2020! Can't wait to laugh in 2019? No worries, Hollywood has got you c...
#59 of 63 The Best New Kids Movies of the Last Few Years 103k VOTES If you're looking for the best movies to watch with your kids, this list of new children's films is for you. Featuring the b...
#23 of 44 The Funniest Comedy Movies About Family 4.8k VOTES Family can be a funny thing. The top comedy movies about families feature miscommunications, mishaps, and love that can surv...
#4 of 9 The Best Movies and Series in the Addams Family Franchise 552 VOTES The first Addams Family movie to come out was in 1991 but the original television series aired back in the ‘60s. Since that ...
#21 of 36 The Best Family and Kids Movies of 2019 3.7k VOTES UPDATE: Check out the top kids films of 2020! Whether you have kids or just appreciate children's media, you can vote on t...
#42 of 42 The Best Comedy Movies for 12 Year Old Kids 187 VOTES What comedy films can 12 year old kids watch? They have to be free of gratuitous adult situations and vulgar language, ...