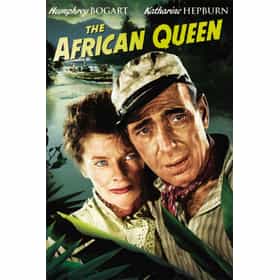 The African Queen is a 1951 adventure film adapted from the 1935 novel of the same name by C. S. Forester. The film was directed by John Huston and produced by Sam Spiegel and John Woolf. The screenplay was adapted by James Agee, John Huston, John Collier and Peter Viertel. It was photographed in Technicolor by Jack Cardiff and had a music score by Allan Gray. The film stars Humphrey Bogart, and Katharine Hepburn with Robert Morley, Peter Bull, Walter Gotell, Richard Marner and Theodore Bikel. The African Queen has been selected for preservation in the United States National Film Registry in 1994, with the Library of Congress deeming it "culturally, historically or aesthetically ... more on Wikipedia

The African Queen is ranked on...

#135 of 6,106 People who voted for The African Queen... People over 50 are 2x more likely to vote for this also upvote Katharine Hepburn on The Greatest Actors & Actresses in Entertainment History The Best Movies Of All Time 5.6M VOTES These are the best movies of all time, ranked by movie experts and film fans alike. What are the greatest movies in cinema h...
#25 of 75 50+ Quirky Romance Movies That Are Unique in Their Own Way 1.7k VOTES All romantic comedies show people falling in love, but the best quirky romance movies are each unique in their own way. The ...
#49 of 209 The Best Adventure Movies 76.2k VOTES List of adventure movies. What are the best adventure movies? If you're a thrill-seeking, adrenaline-obsessed movie-goer, th...
#13 of 43 The Best Adventure Movies That Take Place in the Jungle 2k VOTES The jungle is a dangerous place to go looking for an adventure. The best jungle action movies feature characters out of...
#26 of 100 The Best Movies of 1951 3.4k VOTES List of the best movies of 1951, with movie trailers when available. Famous actors and actresses like Jeff Bridges, William ...
#6 of 81 The Best Humphrey Bogart Movies 11.3k VOTES Here is a list of the best Humphrey Bogart movies, ranked best to worst with movie trailers when available. Everyone knows t...
#12 of 30 The Best Romance Movies of the '50s 2.1k VOTES This list of 1950s romance movies features some of the finest love stories on film, whether in color or in black and white. ...
#6 of 42 The Best Africa Movies 770 VOTES Safaris, pyramids, and sphinx’s, blood diamonds, Nelson Mandela, apartheid. This and much more can be found on the continent...
#6 of 74 The Best World War 1 Movies 15.1k VOTES This is a list of the best World War 1 movies ever made with pictures. The following WW1 films list can be sorted by cast, y...
#5 of 16 The Best Movies About African Colonialism, Ranked 146 VOTES This list contains information on the best movies about African colonialism, ranked from best to worst by user votes. The be...
AFI's Top 100 Love Story Movies 18.7k VIEWS AFI's list of the best love story films of all-time. This romance movies list is sure to sweep you off your feet.

The African Queen is also found on...