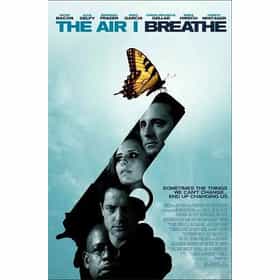 The Air I Breathe

The Air I Breathe is the 2007 directorial film debut of Korean-American filmmaker Jieho Lee, who co-wrote the script with Bob DeRosa. It stars Kevin Bacon, Julie Delpy, Brendan Fraser, Andy Garcia, Sarah Michelle Gellar, Emile Hirsch, and Forest Whitaker. The film was financed by NALA Investments through its production company NALA Films, and was released on January 25, 2008 in the United States. The concept of the film is based on an ancient Chinese proverb that breaks life down into four emotional cornerstones – Happiness, Pleasure, Sorrow, and Love. The proverb speaks of these emotions, not as isolated fragments of feelings, but as elements that make up the whole of the human ... more on Wikipedia

The Air I Breathe is ranked on...

The Air I Breathe is also found on...