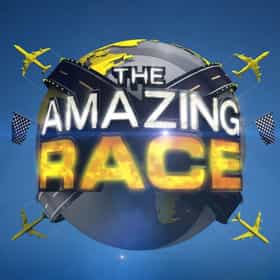 The Amazing Race is a reality television game show in which teams of two people, who have some form of a preexisting personal relationship, race around the world in competition with other teams. Contestants strive to arrive first at "Pit Stops" at the end of each leg of the race to win prizes and to avoid coming in last, which carries the possibility of elimination or a significant disadvantage in the following leg. Contestants travel to and within multiple countries in a variety of transportation modes, including airplanes, hot air balloons, helicopters, trucks, bicycles, taxicabs, cars, trains, buses, boats, and by foot. Clues provided in each leg lead the teams to the next ... more on Wikipedia

The Amazing Race is ranked on...

#322 of 2,296 The Greatest TV Shows Of All Time 1.4M VOTES Choosing the best TV shows of all time means taking into account the best TV dramas, the best TV comedies, the best cartoons...
#57 of 290 People who voted for The Amazing Race... People under 30 are 2x more likely to vote for this The Most Overrated TV Shows Of All Time 545.8k VOTES List of the most overrated TV shows of all time, ranked by fans, critics, and people like you. Ever since the dawn of the ...
#3 of 26 The Best Current Reality Shows That Make You A Better Person 282 VOTES While traditionally pigeonholed as a trashy genre, there is plenty of current reality TV with substance. Whether it's learni...
#10 of 254 The Best Reality TV Shows Ever 168.1k VOTES This is a list of the best reality TV shows on television, the most (often shamefully) addictive reality TV series. From g...
#4 of 135 People who voted for The Amazing Race... also upvote James Bond Franchise on Every James Bond Movie, Ranked Best to Worst The Best Reality Competition Series 74.6k VOTES The best reality TV competition series, ranked by fans and critics. Reality shows are among the most-watched programs on TV,...
#25 of 44 Reality Shows That Involve Actual Skill 10.5k VOTES Ever come across one of those reality shows that you found strangely addicting, whether or not you’re tend to love or hate r...
#10 of 12 All The Things You Have To Agree To Before Appearing On These Reality TV Shows 1k VOTES If you think what you see on reality television is crazy, just imagine all the craziness you're not seeing behind the scenes...
#7 of 30 What to Watch If You Love 'MasterChef' 116 VOTES MasterChef kept viewers on the edge of their seats as home chefs compete for a $250,000 prize, so it's no surprise that you’...
#1 of 31 What to Watch If You Love 'Survivor' 205 VOTES Survivor is one of the first reality competition shows to work in the United States, and its success is evidenced ...
#17 of 93 The Best TV Shows Returning Fall 2018 6.6k VOTES Along with new series premieres, the best TV shows returning fall 2018 offers too many great choices for binge-watching ente...
#20 of 30 What to Watch If You Love 'Hell's Kitchen' 44 VOTES Hell's Kitchen kept viewers on the edge of their seats with career-making competitions for aspiring chefs, so it's no surpri...
#6 of 85 The Best Reality Shows Currently on TV 46.2k VOTES What are the best reality shows on right now ? Are you a Real Housewives faithful or are you totally into reality shows set ...
#3 of 24 The Most Exciting Reality Competition Shows in 2019 452 VOTES The most exciting reality competition TV shows new or ongoing in 2019 are some of the most fun and entertaining to watch on ...
#12 of 49 The Greatest Reality Shows of the 2010s 5.4k VOTES This decade saw the rise of reality TV as it became more niche and truly had something to offer everyone. From some great 20...
#131 of 476 The Best Television Shows of the 2000s 145.8k VOTES Some great TV shows came out of the 2000s, while some have even lived on. Here's a list of the best shows that aired from 20...
#12 of 18 The Best Current TV Shows the Whole Family Can Enjoy 16.1k VOTES This list of 2017 family-friendly TV shows will help parents and their children find all kinds of television series that e...
#6 of 32 The Best Reality TV Shows On Amazon Prime 8.3k VOTES Here is a list of the best reality TV on Amazon Prime's streaming service. These great reality shows feature many of th...
#18 of 25 The Best Obstacle Course Competition Series Ever 398 VOTES Would you have what it takes to make it through a treacherous obstacle course? There are plenty of obstacle course reality s...
#16 of 25 The Best Jerry Bruckheimer Shows and TV Series 1.5k VOTES Jerry Bruckheimer shows list, ranked best to worst, including images of the shows when available. These TV series made by TV...
#1 of 50 The Most Exciting Reality Competition Shows Ever Made 301 VOTES The best reality competition TV shows ever aired are some of the most exciting and competitive series to watch on telev...
#95 of 99 The Best 2010s CBS Series 1.9k VOTES Looking for a great show to watch or catch up on? These are the best 2010s CBS shows ranked from best to worst by user votes...

The Amazing Race is also found on...

Longest Running Reality TV Shows in the US