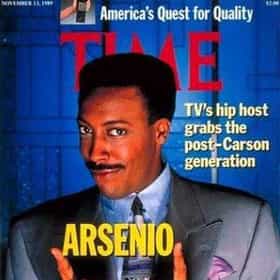 The Arsenio Hall Show is an American late-night talk show created and hosted by Arsenio Hall. There are two separate programs that have been titled The Arsenio Hall Show, both airing in syndication. The first premiered on January 3, 1989, and ran until May 27, 1994. The second series debuted on September 9, 2013 and was canceled on May 30, 2014. Both series were produced by Hall's production company, Arsenio Hall Communications. The original series was produced and distributed by Paramount Domestic Television and taped at Paramount Studios in Los Angeles, California. The second series was shot at Sunset Bronson Studios and was produced by Tribune Broadcasting, Octagon Entertainment, ... more on Wikipedia

The Arsenio Hall Show is ranked on...