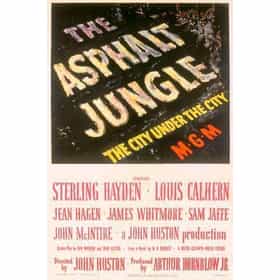 The Asphalt Jungle is a 1950 film noir directed by John Huston. The caper film is based on the 1949 novel of the same name by W. R. Burnett and stars an ensemble cast including Sterling Hayden, Jean Hagen, Sam Jaffe, Louis Calhern, James Whitmore, and, in a minor but key role, Marilyn Monroe, an unknown at the time who was pictured but not mentioned on the posters. The film tells the story of a group of men planning and executing a jewel caper. It was nominated for four Academy Awards. ... more on Wikipedia

The Asphalt Jungle is ranked on...

#23 of 47 The Best '50s Thriller Movies 1.7k VOTES The best '50s thriller movies are an interesting mix of films directed by Alfred Hitchcock, films NOT-directed by Hitchcoc...
#12 of 33 People who voted for The Asphalt Jungle... are 29x more likely to vote for Some Like It Hot on this list are 15x more likely to vote for The Misfits on this list The Very Best Marilyn Monroe Movies 5.7k VOTES Marilyn Monroe was not only one of the most beautiful women of all time; she was also a talented and beloved actress. This...
#7 of 97 The Best Caper Story Movies 931 VOTES A list of all the best caper story movies ever made, many of which are streaming on Netflix and Amazon Prime. This caper mov...
Filmsite's Greatest Films of the 50's 5.5k VIEWS Greatest films of the 1950's. These are only the best movies from the 50s. For the full article go to: http://www.filmsite...

The Asphalt Jungle is also found on...