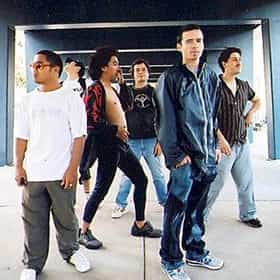 The Avalanches are an Australian electronic music group known for their debut plunderphonics album Since I Left You, as well as their live and recorded DJ sets. Their lineup currently consists of Robbie Chater on keyboards and Tony Di Blasi on keyboards, bass, and backing vocals. The Avalanches' only full-length album, Since I Left You, was a critical and commercial success, peaking in the top 10 on the UK Albums Chart in April 2001. At the ARIA Music Awards of 2001, the group received nine nominations and won four categories, including "Best New Artist – Album". In October 2010, the album was listed at No. 10 in the book, 100 Best Australian Albums. It has also been named #1 ... more on Wikipedia

The Avalanches is ranked on...

#536 of 676 The Best Alternative Bands/Artists 200.9k VOTES At the end of the 1980s, at the peak of glam rock and hair metal, a new genre began to emerge from the underground. Since it...
#175 of 310 The Best Australian Bands, Ranked 165.6k VOTES Who are the best Australian bands? The best bands from Australia you'll find on this list come from a variety of different m...
#42 of 131 The Best Alternative Dance Bands 3k VOTES Mixing elements of rock, most notably post-punk, indie and alternative rock with electronic dance music, alternative dance w...
#9 of 19 The Best Nu-disco Artists 154 VOTES Nu-disco artists list, with photos, ranked best to worst by votes. List of good nu-disco bands includes a filter so you can ...

The Avalanches is also found on...