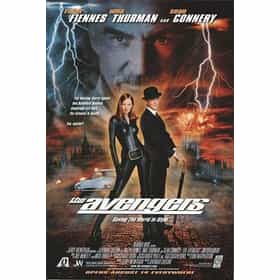 The Avengers is a 1998 American action spy film adaptation of the British television series of the same name from the 1960s. The film was directed by Jeremiah Chechik. It stars Ralph Fiennes and Uma Thurman as secret agents John Steed and Emma Peel, and Sean Connery as Sir August de Wynter, a mad scientist bent on controlling the world's weather and manipulating various governments for sun or rain. Patrick Macnee, who played John Steed on the original series, makes a vocal cameo as the voice of Invisible Jones. ... more on Wikipedia

The Avengers is ranked on...

The Avengers is also found on...

Movies with Cinematography by Roger Pratt