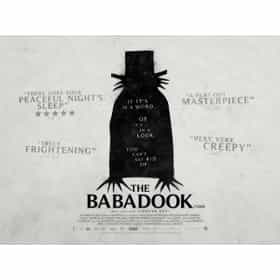 The Babadook is a 2014 Australian psychological horror film, written and directed by Jennifer Kent, in which a woman and her son are tormented by a "boogie-man" type monster. The film stars Essie Davis and Noah Wiseman, while Daniel Henshall, Hayley McElhinney, Barbara West, and Ben Winspear appear in supporting roles. The Babadook was produced by Causeway Films and is based on the short film Monster, also written and directed by Kent. The film was shown at the 2014 Sundance Film Festival and received widespread critical acclaim. ... more on Wikipedia

The Babadook is ranked on...

#90 of 250 The Best Psychological Thrillers of All Time 481.8k VOTES A list of the best psychological thrillers of all time, ranked by fans who may or may not be trying to mess with your head! ...
#119 of 804 The Best Horror Movies Of All Time 1.1M VOTES Horror movies, ranked by adrenaline junkies worldwide. Anyone can vote on this CrowdRanked list, and can even add your own f...
#36 of 160 The Best Movies of 2014 66.1k VOTES Sure there are the Oscars, Golden Globes, and a number of other award ceremonies that hand out trophies to movies that are v...
#46 of 114 The Best Intelligent Horror Movies 668.1k VOTES If you think horror movies are nothing more than slashers slashing, supernatural creatures wreaking havoc, and gallons of th...
#8 of 20 Horror Movies That Defined The Genre In The 2010s 1.8k VOTES The 2010s was a major decade for horror movies. In just 10 years, filmmakers expanded the boundaries of what can be don...
#21 of 66 The Best Demonic Possession Movies 33.4k VOTES There’s nothing more horrifying than watching a movie about a person who’s possessed by a demon. What is it about the though...
#18 of 147 The Best and Scariest Psychological Thrillers of All Time 51.2k VOTES What are the best and scariest psychological thrillers and psychological horror  movies of all time? If you consid...
#14 of 22 The Most Pretentious Horror Movies Ever Made 6.9k VOTES When an intelligent horror film is released, fans of the genre often judge it by its level of pretension. Movies like&n...
#50 of 108 The Greatest Directorial Debuts Of All Time 5.8k VOTES Believe it or not, some of the greatest films of all time were also some of the greatest directorial debuts to date. It...
#3 of 27 27 Horror Films You Had No Idea Were Directed By Women 2.1k VOTES Women have directed more than a few genre-defining horror films. And while the Me Too movement has shown how Hollywood margi...
#14 of 23 23 Super Awesome Horror Movies On Hulu You Can Watch Right Now 1.2k VOTES The full moon is peaking from behind a cloud, a raven caws in the night, and you’ve spoken the wretched spell/logged into Hu...
#23 of 31 The Best Movies About Nightmares 251 VOTES When thinking about the best nightmare movies, the Nightmare on Elm Street franchise certainly comes to mind but t...
#7 of 54 The Best Australian Dramas 389 VOTES These are the best Australian dramas, ranked from best to worst by user votes. Some Australian drama movies revolve around h...
#20 of 46 The Best Mother-Son Movies Ever Made 4.6k VOTES If you're looking for the best movies for mothers and sons to watch together, then look no further! The best mother-son movi...
#7 of 32 The Best Drama Movies of 2014 691 VOTES Let's get dramatic... There were a lot of great drama movies released in 2014, but which were the greatest? This list of the...
#1 of 36 The Scariest Movies of 2014 2k VOTES These scary movies from 2014 brought as many scares as the classic horror films of the '70s and '80s. Hopefully you wer...
#2 of 55 The Best Horror Movies About Parenting 523 VOTES Parenting can be scary. Talk to anyone with children and they'll tell you that the fear of messing up their kids is a prime ...
#3 of 15 Horror Villains That Are Inanimate Objects, Ranked by How Spooky They Are 193 VOTES It's easy to make a monster, an alien, or some other grotesque creature of the night scary. Just give 'em fangs, claws, the ...
#17 of 118 The Best Horror Movies of the 21st Century 26k VOTES A list of the Best Horror Movies of the 21st Century. Looking for some recently-made horror movies to enjoy? This list provi...
#72 of 505 The Scariest Movies Ever Made 549.3k VOTES These are the all-time scariest movies ever made. Many of these movies have become part of the pop culture lexicon due to th...
#1 of 47 The Best Australian Horror Movies 794 VOTES For those looking for a scare from down under, here's our list of the best Australian horror movies of all time. Australia h...
These Modern Horror Films Remind Us The Haunted House Is Just Metaphor For The Haunted Mind 3.8k VIEWS Haunted house films, one of the horror genre's most beloved tropes, bring more to the table than just slammed doors, bleedin...
Horror Movies On Netflix With The Highest Rotten Tomatoes Scores 268.9k VIEWS Figuring out the best horror movies on Netflix remains a time-consuming task. Choice paralysis is no joke, and sometimes rel...
#14 of 19 The Scariest Horror Movies About Families 4.6k VOTES Horror movies sometimes deal with lone individuals who are literally or figuratively isolated from society. But more often t...
#6 of 60 The Best Drama Movies With A Supernatural Twist 642 VOTES Looking for dramatic movies that have a supernatural twist? These are the best supernatural drama movies the hybrid genre ha...