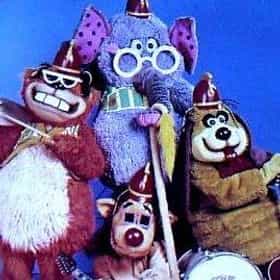 The Banana Splits Adventure Hour was an hour-long, packaged television variety program featuring The Banana Splits, a fictional rock band composed of four funny animal characters. The costumed hosts of the show were Fleegle, Bingo, Drooper and Snorky. The series was produced by Hanna-Barbera, and ran for 31 episodes on NBC Saturday mornings, from September 7, 1968, to September 5, 1970. The costumes and sets were designed by Sid and Marty Krofft and the series' sponsor was Kellogg's Cereals. The show featured both live action and animated segments and was Hanna-Barbera’s first foray into mixing live action with animation. ... more on Wikipedia

The Banana Splits Adventure Hour is ranked on...

#449 of 717 People who voted for The Banana Splits Adventure Hour... People in the Northeast are 2x more likely to vote for this The Best Cartoons of All Time 3M VOTES There have been many fantastic animated TV shows throughout the history, but which ones are the best? Some people think that...
#205 of 375 The Best Children's TV Shows 49.6k VOTES Here you have it, folks: a list of the very best kids' shows on television, ranked from best to worst, as voted on by people...
#23 of 77 The Best Puppet TV Shows 11.5k VOTES The very best puppet shows on television, ranked from best to worst, including '90s kids puppet shows for younger children. ...
#25 of 38 The Best Family-Friendly Musical TV Shows, Ranked 1.7k VOTES Family musical TV shows promote learning, singing, and having fun with your loved ones. The best kids musical shows feature ...
#17 of 35 The Best 1970s Animated Series 1.3k VOTES These are the very best 1970s animated series, ranked from best to worst by user votes. The animated series of the 1970s are...
#37 of 54 The Best Musical Kids TV Shows Ever Made 733 VOTES Chances are if you grew up sometime in the latter half of the 20th century, your childhood was filled with musical tele...