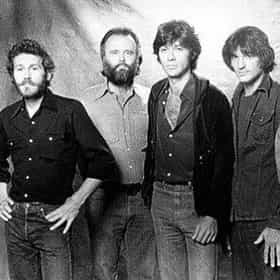 The Band was a Canadian-American roots rock group including Rick Danko (bass guitar, vocals, fiddle), Garth Hudson (keyboards, accordion, saxophone), Richard Manuel (keyboards, drums, vocals), Robbie Robertson (guitar, vocals), and Levon Helm (drums, vocals, mandolin, guitar). The members of the Band first came together as rockabilly singer Ronnie Hawkins's Toronto, Ontario-based backing group, The Hawks, which they joined one by one between 1958 and 1963. In 1964, they separated from Hawkins (and subsequently The Hawks), after which they toured and released a few singles as Levon and the Hawks and the Canadian Squires. The next year, Bob Dylan hired them for his U.S. tour in 1965 and ... more on Wikipedia

lists about The Band

The Best Band Albums of All Time 355 votes The Band are known as one of the greatest rock bands of all time and easily one of the best Americana bands as well. List of...

The Band is ranked on...

#149 of 2,187 The Greatest Musical Artists of All Time 13.4M VOTES When VH1 polled fellow artists to name the greatest artists of all time, it seemed like a good idea---but in reality, the li...
#60 of 350 People who voted for The Band... People in the Northeast are 2x more likely to vote for this The Greatest Classic Rock Bands 485.1k VOTES The greatest classic rock bands of all time embody the spirit of a generation of people who just wanted to rock. These top c...
#213 of 380 The Best Pop Artists of the 1980s 378.1k VOTES The 1980s was a huge decade in terms of breaking pop stars. 80s artists benefited from the rising popularity of cable televi...
#118 of 139 The Most Undeserving Members of the Rock Hall of Fame 407.6k VOTES The most undeserving members of the Rock Hall of Fame are all respectable and successful musicians and bands but quite simpl...
#132 of 854 These Poetic Geniuses Wrote Your Favorite Songs of All Time 359.8k VOTES If you ask anyone who has ever tried, it's tough to write one song, nevertheless a batch to be considered a songwriter. Add ...
#100 of 278 Rank the Rock N Roll Hall of Fame Inductees 306.2k VOTES A complete list of bands and artists inducted into the Rock and Roll Hall of Fame, ranked in order of preference by music fa...
#58 of 279 The Top Pop Artists of the 1960s 92.1k VOTES List of the best pop artists of the 60s, ranked. The 1960s may very well be the best decade for music in the rock era. Music...
#4 of 252 The Best Canadian Rock Bands 187k VOTES Over the years, Canada has produced some of the finest rock bands in the world. Though the Canadian rock scene doesn't get...
10 Famous Rock Bands That Were Struck By Horrifying & Violent Tragedies 280.3k VIEWS Sometimes being in a band isn't all it's cracked up to be. Just ask these bands, all of which suffered terrible fates. ...
#18 of 81 The Best Southern Rock Bands of All Time 37.7k VOTES Using elements of rock, country and blues, Southern rock is a genre that (you guessed it) came from the Southern part of the...

The Band is also found on...