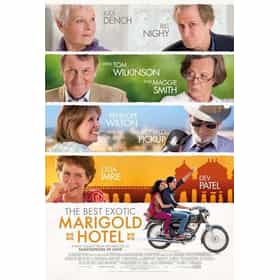 The Best Exotic Marigold Hotel is a 2012 British comedy-drama film, directed by John Madden. The screenplay, written by Ol Parker, is based on the 2004 novel These Foolish Things, by Deborah Moggach, and features an ensemble cast consisting of Judi Dench, Celia Imrie, Bill Nighy, Ronald Pickup, Maggie Smith, Tom Wilkinson and Penelope Wilton, as a group of British pensioners moving to a retirement hotel in India, run by the young and eager Sonny, played by Dev Patel. The movie was produced by Participant Media and Blueprint Pictures on a budget of $10 million. Producers Graham Broadbent and Peter Czernin first saw the potential for a film in Deborah Moggach's novel with the idea of ... more on Wikipedia

The Best Exotic Marigold Hotel is ranked on...

The Best Exotic Marigold Hotel is also found on...