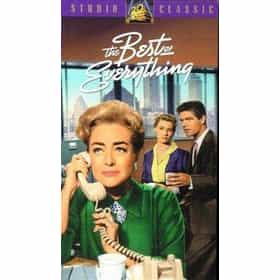 The Best of Everything

The Best of Everything is a 1959 romantic drama film released by 20th Century-Fox, and starring Hope Lange, Diane Baker, Suzy Parker, Stephen Boyd, Louis Jourdan, Robert Evans, and Joan Crawford. The movie relates the professional careers and private lives of three women who share a small apartment in New York City and work together in a paperback publishing firm. The screenplay was written by Edith Sommer and Mann Rubin, which the adapted from the 1958 novel of the same name by Rona Jaffe. The film was directed by Jean Negulesco and produced by Jerry Wald. Alfred Newman wrote the musical score, the last under his longtime contract as Fox's musical director. The film has been released ... more on Wikipedia

The Best of Everything is ranked on...

The Best of Everything is also found on...