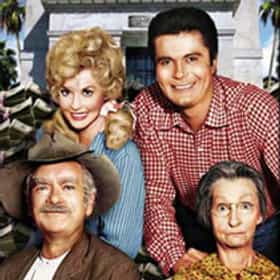 The Beverly Hillbillies is an American sitcom originally broadcast for nine seasons on CBS from September 26, 1962 to March 23, 1971, starring Buddy Ebsen, Irene Ryan, Donna Douglas, and Max Baer, Jr. The series is about a poor backwoods family transplanted to Beverly Hills, California, after striking oil on their land. A Filmways production created by writer Paul Henning, it is the first in a genre of "fish out of water" television shows, and was followed by other Henning-inspired country-cousin series on CBS. In 1963, Henning introduced Petticoat Junction, and in 1965 he reversed the rags-to-riches model for Green Acres. Panned by many entertainment critics in its time, it ... more on Wikipedia

The Beverly Hillbillies is ranked on...

The Beverly Hillbillies is also found on...