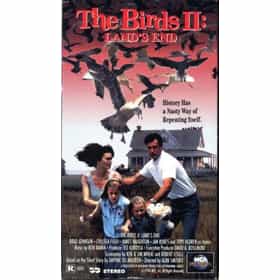 The Birds II: Land's End is the 1994 television movie sequel to Alfred Hitchcock's 1963 classic The Birds. It stars Brad Johnson, Chelsea Field, James Naughton, and Tippi Hedren, in a role different from the one she played in the original Hitchcock film. The original music score was composed by Ron Ramin. The plot of the sequel is very similar to the original. Biology teacher and Somali Civil War veteran, Ted, his wife, and children move to a summer house on an island after the death of their son. While there, flocks of birds start attacking individuals for no apparent reason. The town mayor denies the birds' role in the injuries, but is forced to believe after further incidents of ... more on Wikipedia

The Birds II: Land's End is ranked on...

#2 of 26 26 Spin-Offs And Sequels To Hollywood Films You Probably Never Knew Existed 1.1k VOTES Casablanca. Gone with the Wind. Bambi. Classic works of cinematic art that tell a complete, self-contained story. But you ma...
#60 of 78 The Best Natural Horror Films 1.9k VOTES A list of the best natural horror movies ever made, ranked by film fans' votes. This list is ordered by popularity, so only ...
#10 of 38 The Best Tippi Hedren Movies 261 VOTES List of the best Tippi Hedren movies, ranked best to worst with movie trailers when available. Tippi Hedren's highest grossi...

The Birds II: Land's End is also found on...