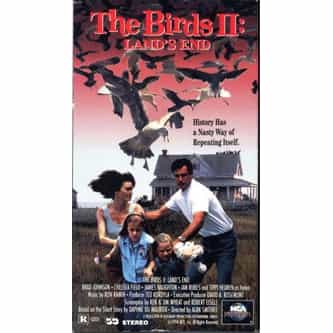 The Birds II: Land's End is the 1994 television movie sequel to Alfred Hitchcock's 1963 classic The Birds. It stars Brad Johnson, Chelsea Field, James Naughton, and Tippi Hedren, in a role different from the one she played in the original Hitchcock film. The original music score was composed by Ron Ramin. The plot of the sequel is very similar to the original. Biology teacher and Somali Civil War veteran, Ted, his wife, and children move to a summer house on an island after the death of ... more on Wikipedia

The Birds II: Land's End IS LISTED ON