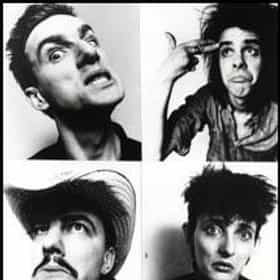 The Birthday Party (originally known as The Boys Next Door) were an Australian post-punk band, active from 1978 to 1983. Despite limited commercial success, The Birthday Party's influence has been far-reaching, and they have been called "one of the darkest and most challenging post-punk groups to emerge in the early '80s." The group's "bleak and noisy soundscapes," which drew irreverently on blues, free jazz, and rockabilly, provided the setting for vocalist Nick Cave's disturbing tales of violence and perversion. Their music has been described by critic Simon Reynolds as gothic, and their single "Release the Bats" was particularly influential on the ... more on Wikipedia

The Birthday Party is ranked on...

#45 of 66 The Best Bands Named After Books and Literary Characters 11k VOTES The best bands that are named after books span the music world with offerings from music genres like indie rock, classic roc...
#271 of 380 The Best Punk Bands Of All Time 630.6k VOTES Punk rock is one of the most popular rock subgenres. The subject of who is the greatest punk band has fueled argument and de...
#106 of 199 The Best Darkwave Bands/Artists 12.9k VOTES With its origins beginning in the 1970s, darkwave took post-punk and New Wave and added dark introspective lyrics that diffe...
#120 of 310 The Best Australian Bands, Ranked 165.5k VOTES Who are the best Australian bands? The best bands from Australia you'll find on this list come from a variety of different m...

The Birthday Party is also found on...