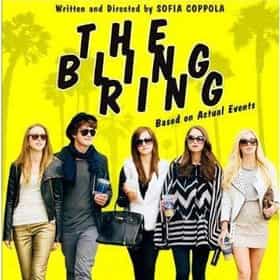 The Bling Ring is a 2013 American satirical crime film based on actual events. Written, directed and produced by Sofia Coppola, it features an ensemble cast including newcomers Israel Broussard, Katie Chang and Claire Julien, as well as Taissa Farmiga and Emma Watson. Filming began in March 2012. It opened the Un Certain Regard section of the 2013 Cannes Film Festival and was released in the United States on June 14 and on June 21. The Bling Ring represents the final work of the cinematographer Harris Savides, who died of brain cancer while the film was in post-production. The film is dedicated to him. ... more on Wikipedia

lists about The Bling Ring

What Happened To All The Teens From The Notorious Bling Ring? 28.5k views Plenty of young adults make stupid mistakes, but the escapades of the members of the Bling Ring went way beyond garden-varie...

The Bling Ring is ranked on...

#209 of 241 The Best Movies for Women 31.5k VOTES The films on this list of the best movies for women have been ranked as the absolute best. From wedding movies to rom-coms, ...
#48 of 53 The Best Movies "Loosely" Based on True Stories 6.9k VOTES "Based on a true story" isn't always exactly accurate. This list of movies loosely based on true stories took a fe...
#266 of 273 Good Movies for 13-Year-Olds 109.5k VOTES This list has awesome movies for 13-year-olds, ranked from best to worst by user votes. The best movies for 13-year-olds cov...
#122 of 341 People who voted for The Bling Ring... People outside of the US are 2x more likely to vote for this The Best Movies All Hipsters Love 105.3k VOTES Grab your mason jars, mustache comb, and ironic glasses, it’s time to rank the most hipster movies of all time! As any self-...
#81 of 87 The Best Los Angeles Movies 2.8k VOTES Iconic red carpets, a sidewalk dotted with stars in honor of the world’s most famous celebrities, Hollywood, million-dollar ...
#8 of 140 The Best Movies From Pathé, Ranked 669 VOTES Here is a list of all the movies that are produced by or distributed by Pathé, such as Chicken Run, Bright Star, and ...
#14 of 15 The 15 Best Netflix Teen Movies That Will Take You Back To High School 127 VOTES With so many titles to pick from, Netflix truly has something for everyone. In recent years, they've started producing a gen...