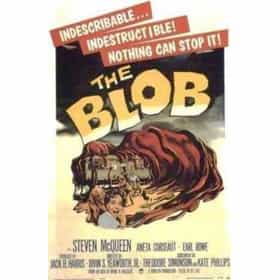 The Blob is an independently made 1958 American horror/science fiction film directed by Irvin Yeaworth. In the style of American International Pictures, Paramount Pictures released the film as a double feature with I Married a Monster from Outer Space. The film stars a 27-year old Steve McQueen in his debut leading role as a teenager, and Aneta Corsaut, as his co-star. The plot depicts a growing alien amoeba that crashes from outer space in a meteorite and eats and dissolves citizens at the small community of Downingtown, Pennsylvania. The origin of The Blob is never identified and the film ends with a question mark. ... more on Wikipedia

The Blob is ranked on...

#237 of 336 'Old' Movies Every Young Person Needs To Watch In Their Lifetime 1M VOTES If you're a younger millennial, you've probably heard your older friends and coworkers say things like "Hey, you g...
#973 of 6,106 The Best Movies Of All Time 5.7M VOTES These are the best movies of all time, ranked by movie experts and film fans alike. What are the greatest movies in cinema h...
#20 of 20 20 Horrifying Crime Movies Whose True Stories Are Way More Terrifying 109.4k VOTES Not all the movies on this list are, strictly speaking, crime films. However, these movies all have their roots in real tran...
#12 of 115 The Scariest Giant Monster Movies 32.9k VOTES List of the scariest giant monster movies of all time, as ranked by monster movie aficionados and film critics. Ever since 1...
#11 of 47 The Greatest Classic Sci-Fi Movies 31.2k VOTES Terrifying monsters and unwelcome visitors from space frightened movie-goers in classic sci-fi movies. The best old sci fi m...
#5 of 12 Terrible Horror Movies With Great Special Effects 440 VOTES Have you ever seen a horror movie that was so bad you could barely stand to watch it - but you found that it had s...
#386 of 570 The Greatest Sci-Fi Movies of All Time 567.7k VOTES What are the greatest sci-fi movies of all time? Science fiction films are among the most popular movies in cinematic h...
#162 of 506 The Scariest Movies Ever Made 549.8k VOTES These are the all-time scariest movies ever made. Many of these movies have become part of the pop culture lexicon due to th...
#14 of 115 The Best Old Horror Movies 33.2k VOTES The best old horror movies include classic scary films designed to terrify. Early horror movies tapped into our deepest fear...
#4 of 38 The Best Monster Movies of the 1950s 5.2k VOTES The best horror movies of the 50s are just waiting for you to rank them, so if you're a classic horror geek, then this list ...
#32 of 58 The Scariest Small Town Horror Movies 2k VOTES The greatest small town horror movies offer something special for people who like to be scared. In these settings, ther...
#22 of 211 The Best Movies of 1958 4.4k VOTES List of the best movies of 1958, with movie trailers when available. Many remember 1958 as the year Jack Nicholson made his ...
#10 of 72 The Best Sci-Fi Movies of the 1950s 10.5k VOTES On this list of the best 1950s sci-fi movies, you will see a significant crossover between horror and science fiction. The s...
12 Random B-Horror Movies With Appearances From Famous Actors 14.7k VIEWS B movies are wonderful. They’re inexpensive to make, so you can get a nice return on your low budget creature feature a...
#8 of 46 The Best Giant Monster Movies 6.3k VOTES A list of the best giant monster movies of all time. We believe we thought of them all, but if your favorite giant monster f...
#17 of 31 The Best Steve McQueen Movies 5.8k VOTES List of the best Steve McQueen movies, ranked best to worst with movie trailers when available. Believe it or not, one of St...
#21 of 36 The Best Campy Horror Movies, Ranked 1.8k VOTES Horror movies can be truly terrifying, but shoddy special effects and poor acting often turn films meant to be terrorizing i...

The Blob is also found on...