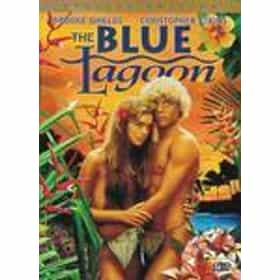 The Blue Lagoon is a 1980 American romantic adventure film directed by Randal Kleiser. The screenplay by Douglas Day Stewart was based on the novel The Blue Lagoon by Henry De Vere Stacpoole. The film stars Brooke Shields and Christopher Atkins. The original music score was composed by Basil Poledouris and the cinematography was by Néstor Almendros. The film is a remake of a 1949 film by the same name. The film tells the story of two young children marooned on a tropical island paradise in the South Pacific. With neither the guidance nor the restrictions of society, emotional feelings and physical changes arise as they reach puberty and fall in love. ... more on Wikipedia

lists about The Blue Lagoon

The Best Quotes From The Blue Lagoon 42 votes The best The Blue Lagoon quotes make you realize how great the movie really is, even if you haven't seen it in a while. Let'...

The Blue Lagoon is ranked on...

#125 of 624 The Greatest Guilty Pleasure Movies 208.6k VOTES What makes a film a guilty pleasure? This is a movie that you love to watch, but won't display on your DVD shelf... or maybe...
#35 of 123 The Best Movies of 1980 8.7k VOTES 1980 was a rock solid year for movies... these are the best movies made in 1980. From Airplane! to The Empire Strikes back (...
#17 of 32 Great Movies Set on the Beach 651 VOTES Blue skies and golden sand make the beach an ideal location to spent a few hours - even at the movies. Some top beach m...
#4 of 27 The Best Desert Island Movies 620 VOTES This list may not be marooned on far away shores, but it does have lots of awesome desert island movies, ranked from best to...
#27 of 38 The Best Chick Flicks Of The '80s 229 VOTES The decade that gave us slap bracelets and walkmans also put out some good chick flicks. This list of the best '80s chi...
#219 of 420 The Best Columbia Pictures Movies 9.1k VOTES List of Columbia Pictures movies, ranked best to worst, including trailers, genres, and release dates. Columbia Pictures pro...
#15 of 209 The Best Teen Movies Rated R 7.2k VOTES List of R-Rated teen movies, ranked from best to worst with movie trailers when available. Find these and more great movies ...
#26 of 33 The Best Romantic Movies Based on Books 2k VOTES Love is in the air in Hollywood and on the silver screen. The best movies based on romance books feature star-crossed lovers...
#1 of 45 The Best Brooke Shields Movies 2.3k VOTES List of the best Brooke Shields movies, ranked best to worst with movie trailers when available. Since capturing the hearts ...
#6 of 33 The Best Romance Movies of 1980 1.9k VOTES List of the best 1980 romance movies, ranked by how many upvotes they've received by other fans of the genre. If watching me...
#29 of 47 The Best Coming of Age Drama Films 570 VOTES The best coming of age drama movies are capable of truly touching your heart. These films capture the complicated, emotional...

The Blue Lagoon is also found on...