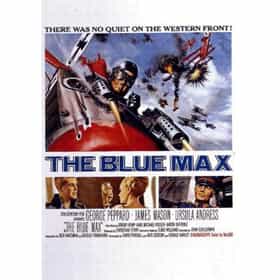 The Blue Max is a 1966 British war film in DeLuxe Color and filmed in CinemaScope, about a German fighter pilot on the Western Front during World War I. It was directed by John Guillermin, stars George Peppard, James Mason and Ursula Andress, and features Karl Michael Vogler and Jeremy Kemp. The screenplay was written by David Pursall, Jack Seddon, and Gerald Hanley, based on the novel of the same name by Jack D. Hunter as adapted by Ben Barzman and Basilio Franchina. ... more on Wikipedia

The Blue Max is ranked on...

The Blue Max is also found on...