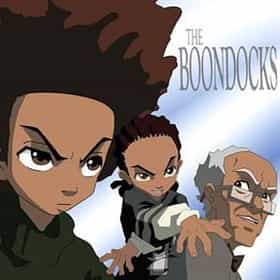 The Boondocks is an American adult animated sitcom on Cartoon Network's late-night programming block, Adult Swim. Created by Aaron McGruder, based upon McGruder's comic strip of the same name, the series premiered on November 6, 2005. The show begins with a black family, the Freemans, settling into the fictional, peaceful, and mostly white suburb of Woodcrest. The perspective offered by this mixture of cultures, lifestyles, social classes, stereotypes, viewpoints and racial identities provides for much of the series' satire, comedy, and conflict. The Boondocks ended on June 23, 2014 with a total of 55 episodes over the course of the show's four seasons. The fourth and final season was ... more on Wikipedia

lists about The Boondocks

The Best Boondocks Episodes of All Time 2.3k votes List of the best Boondocks episodes, as determined by voters like you. Created by cartoonist Aaron McGruder, The Boondocks o...

The Boondocks is ranked on...