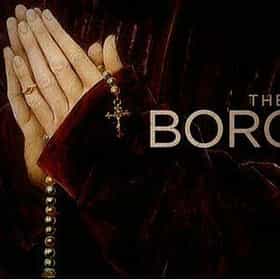 The Borgias is an historical-fiction drama television series created by Neil Jordan; it debuted in 2011 and was canceled in 2013. The series is set around the turn of the 16th century and follows the Borgia family, an Italian dynasty of Spanish origin. It stars Jeremy Irons as Pope Alexander VI with François Arnaud as Cesare, Holliday Grainger as Lucrezia, David Oakes as Juan, and Aidan Alexander as Gioffre Borgia. Colm Feore also stars as Cardinal della Rovere. It premiered on April 3, 2011, at 9 p.m. ET on Showtime in the United States and 10 p.m. Eastern on Bravo! in Canada, and received its first major television network premiere on June 21, 2011, on Canada's CTV Television ... more on Wikipedia

The Borgias is ranked on...