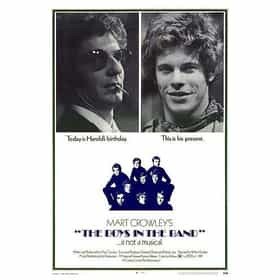 The Boys in the Band

The Boys in the Band is a 1970 American drama film directed by William Friedkin. The screenplay by Mart Crowley is based on his Off Broadway play of the same title. It is among the first major American motion pictures to revolve around gay characters and is often cited as a milestone in the history of queer cinema. The ensemble cast, all of whom also played the roles in the play's initial stage run in New York City, includes Kenneth Nelson as Michael, Peter White as Alan, Leonard Frey as Harold, Cliff Gorman as Emory, Frederick Combs as Donald, Laurence Luckinbill as Hank, Keith Prentice as Larry, Robert La Tourneaux as Cowboy, and Reuben Greene as Bernard. Model/actress Maud Adams has ... more on Wikipedia

The Boys in the Band is ranked on...

The Boys in the Band is also found on...

List of All Movies Released in 1970 Gay Movies: List of All Gay Films Films Edited by Gerald B. Greenberg