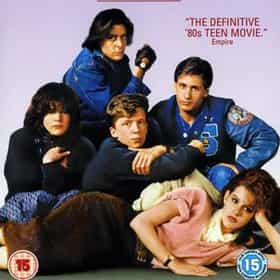 The Breakfast Club is a 1985 American coming-of-age comedy-drama film written, produced, and directed by John Hughes and starring Emilio Estevez, Paul Gleason, Anthony Michael Hall, John Kapelos, Judd Nelson, Molly Ringwald and Ally Sheedy. The storyline follows five teenagers, each a member of a different high school clique, who spend a Saturday in detention together and come to realize that they are all more than their respective stereotypes, while facing a villainous principal. Critics consider it one of the greatest high school films, as well as one of Hughes' most memorable and recognizable works. The media referred to the film's five main actors as members of a group called the ... more on Wikipedia

Who Would Star In 'The Breakfast Club' If It Were Made Today? 38.9k votes What happens when you place five students from different cliques in a room together for Saturday suspension? John Hughes’ se...
The Breakfast Club Is Perfect, But The First Five Minutes Are An Utter Masterpiece 98.8k views Without the first five minutes, this film might not have stood the test of time.
The Best Quotes From 'The Breakfast Club' Make Detention Fun Again 250 votes The best quotes from The Breakfast Club prove why it is such a great movie. Even if you haven’t seen it in a while you can r...

The Breakfast Club is ranked on...

The Breakfast Club is also found on...