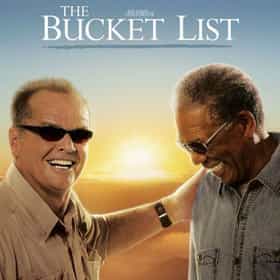 The Bucket List is a 2007 American comedy-drama film directed by Rob Reiner, produced by Reiner, Alan Greisman, Craig Zadan and Neil Meron, written by Justin Zackham, and starring Jack Nicholson and Morgan Freeman. The main plot follows two men on their road trip with a wish list of things to do before they kick the bucket. The film premiered on December 15, 2007 in Hollywood. It opened in limited release in the United States and Canada on December 25, 2007 and was distributed by Warner Bros. ... more on Wikipedia