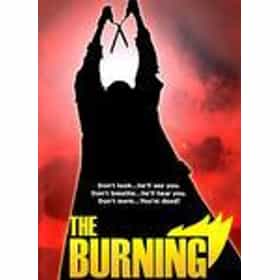 The Burning is a 1981 slasher film directed by Tony Maylam and written by Peter Lawrence and Bob Weinstein. It is based on an original story by Maylam, Weinstein, and Brad Grey, with a musical score by Rick Wakeman of the progressive rock band Yes. The film is loosely based on the upstate New York urban legend of Cropsey, a tale that became popular at summer camps in the 1960s and 70s. In the film a summer camp caretaker, who was horribly disfigured from a prank-gone-wrong, is released from the hospital with severe deformities and seeks revenge on those he holds responsible, starting with the kids at a nearby summer camp. Lou David stars as the maniacal Cropsey, while Brian Matthews ... more on Wikipedia

The Burning is ranked on...

The Burning is also found on...