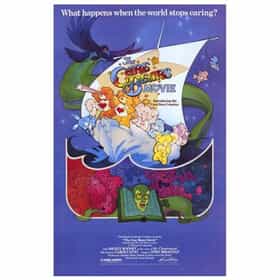 The Care Bears Movie is a 1985 Canadian animated fantasy film, the second feature production from the Toronto animation studio Nelvana. One of the first films based directly on a toy line, it introduced the Care Bears characters and their companions, the Care Bear Cousins. In the film, orphanage owners tell a story about the Care Bears, who live in a cloud-filled land called Care-a-Lot. Travelling across Earth, the Bears help two lonely children named Kim and Jason find new parents, and also save a young magician's apprentice named Nicholas from an evil spirit's influence. Deep within a place called the Forest of Feelings, Kim, Jason, and their friends soon meet another group of ... more on Wikipedia

The Care Bears Movie is ranked on...

#307 of 598 The Best Animated Films Ever 974.2k VOTES The best animated movies of all time are an assortment of animated movies that rank among the best movies ever made. Wh...
#75 of 135 The Best Movies of 1985 23.4k VOTES A list of the best movies of 1985, from instant classics like Back to the Future to cult hits like The Goonies. The '80s w...
#146 of 318 The Best Movies for Kids 201.9k VOTES If you have kids, you know you are always on the lookout for a movie that they will love and that you can sit through withou...
#10 of 12 Movies That Weren't Supposed To Be Scary But Terrified You As A Kid 2.9k VOTES From Gremlins to The Witches, from The Nightmare Before Christmas to Goosebumps, there are plenty of children's movies that ...
#14 of 45 The Best Movies for Toddlers 19.3k VOTES If you have a toddler you know that entertaining them (and keeping up with them) can be a full time job! Fortunately, the fi...
#74 of 100 The Best Mickey Rooney Movies 2k VOTES List of the best Mickey Rooney movies, ranked best to worst with movie trailers when available. Mickey Rooney's highest gros...

The Care Bears Movie is also found on...