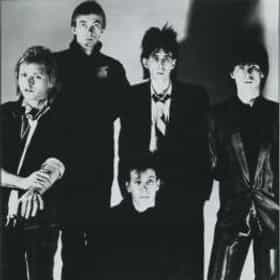 The Cars were an American rock band that emerged from the new wave scene in the late 1970s. The band originated in Boston in 1976, with singer, rhythm guitarist, and songwriter Ric Ocasek; bassist and singer Benjamin Orr; lead guitarist Elliot Easton; keyboardist Greg Hawkes; and drummer David Robinson. The Cars were at the forefront in merging 1970s guitar-oriented rock with the new synthesizer-oriented pop that was then becoming popular and which flourished in the early 1980s. Robert Palmer, music critic for The New York Times and Rolling Stone, described the Cars' musical style by saying: "they have taken some important but disparate contemporary trends—punk minimalism, the ... more on Wikipedia

lists about The Cars

The Best Cars Songs of All Time 5.2k votes List of the best Cars songs, ranked by fans like you. This list includes every single by The Cars, but true fans know there ...

The Cars is ranked on...

#65 of 350 People who voted for The Cars... also upvote James Bond Franchise on Every James Bond Movie, Ranked Best to Worst The Greatest Classic Rock Bands 484.2k VOTES The greatest classic rock bands of all time embody the spirit of a generation of people who just wanted to rock. These top c...
#3 of 284 Musicians Who Belong in the Rock and Roll Hall of Fame 421.6k VOTES Update: the Rock and Roll Hall of Fame has listened to your feedback and inducted a number of artists on this list sinc...
#85 of 2,218 People who voted for The Cars... People over 50 are 2x more likely to vote for this also upvote The Godfather Franchise on The Best Movies of All Time The Best Rock Bands of All Time 3.2M VOTES There are thousands of rock bands that have existed throughout the decades ever since the dawn of rock and roll, but only th...
#73 of 278 Rank the Rock N Roll Hall of Fame Inductees 305.4k VOTES A complete list of bands and artists inducted into the Rock and Roll Hall of Fame, ranked in order of preference by music fa...
#65 of 109 The Best Soft Rock Bands of All Time 77.1k VOTES This soft rock bands list ranks the best indie soft rock artists and musicians by votes. This list of top soft rock artist...
#361 of 542 The Greatest Pop Groups & Artists of All Time 589.9k VOTES For years, pop music has dominated your radio dial. No matter where you listen, there's no doubt that pop music bands and po...
#8 of 374 The Best New Wave Bands 94.9k VOTES This New Wave bands list ranks the best New Wave groups and musicians by votes. This list of top New Wave artists let’s yo...
#31 of 324 The Best Pop Rock Bands & Artists 1G VOTES Over the years, pop rock has come to dominate the radio waves. Mixing a catchy pop sound with light (read: not serious) lyri...
#32 of 117 The Best New Romantic Bands/Artists 8.7k VOTES Though the New Romantic movement rose and fell relatively quickly in terms of time, but that doesn't mean there weren't a nu...
#42 of 179 The Best Electronic Rock Bands/Artists 23.8k VOTES This electronic rock bands list ranks the best electronic rock artists and musicians by votes. This list of electronic ban...
#3 of 205 The Best Power Pop Bands/Artists 14.7k VOTES The genre known as power pop is a derivative of 1960s rock pop that ruled the airwaves. The best power pop bands have catchy...
Every Band & Musician Who Has Performed on Saturday Night Live 106.8k VIEWS Live from the main stage at 30 Rockefeller Plaza, this is a list of every band, musician, and singer who has performed on Sa...

The Cars is also found on...