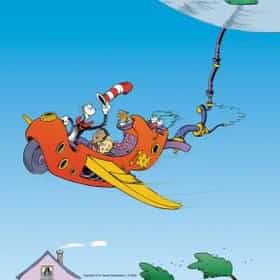 The Cat in the Hat Knows a Lot About That!

The Cat in the Hat Knows a Lot About That! is a Canada–UK co-produced animated television series that premiered August 7, 2010 on Treehouse TV in Canada, on September 6, 2010 on PBS Kids in the US and also in the UK on CITV and Cartoonito. The award-winning series is based on Random House’s Beginner Books franchise, The Cat in the Hat’s Learning Library, and is developed by Portfolio Entertainment, Random House Children Entertainment and Collingwood O’Hare Productions. The first season has 40 half-hour episodes. PBS Kids renewed it for a second season of 20 episodes which premiered on September 10, 2012. Each episode features The Cat in the Hat, who leads six-year-old neighbours Nick ... more on Wikipedia

The Cat in the Hat Knows a Lot About That! is ranked on...

#309 of 385 The Best Kids Cartoons of All Time 1.2M VOTES This list contains information about the best kids cartoons, ranked by your votes. Over the years, there have been tons of g...
#47 of 53 The Best TV Shows Starring SNL Alumni 4.5k VOTES There might just be a machine in Lorne Michaels’s mansion basement that churns out shows starring Saturday Night Live c...
#57 of 154 The Best CITV TV Shows 10.3k VOTES List of popular CITV shows, ranked from best to worst. This list of the top current and cancelled CITV TV series includes th...
#34 of 87 People who voted for The Cat in the Hat Knows a Lot About That!... are 6x more likely to vote for Curious George on this list are 4x more likely to vote for Clifford's Puppy Days on this list The Best PBS Kids TV Shows Ever, Ranked 108.9k VOTES If you were a kid in the 90s or 2000s, you probably have seen several of the best PBS kids TV shows. Many of those PBS kids ...
#11 of 44 Good TV Shows for 4 Year Olds 211 VOTES Figuring out the best TV shows for a 4-year-old to watch can be tough. A lot of those pre-school shows can feel too much lik...
#13 of 45 Good TV Shows for Toddlers 218 VOTES Although many toddlers have limited screentime, many parents also choose fun and educational shows for their toddlers to wat...
#11 of 35 Good TV Shows for Babies 1.5k VOTES Although many parents limit screen time for children under a certain age, many also choose fun and educational shows for the...
#13 of 27 Good Educational Shows for Toddlers 238 VOTES Whether or not toddlers are given a limit on screentime, many parents primarily choose educational shows for toddlers as wha...