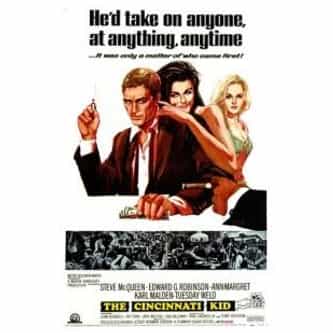 Tagline
He'd take on anyone
at anything
anytime ....it was only a matter of who came first!

The Cincinnati Kid is a 1965 American drama film. It tells the story of Eric "The Kid" Stoner, a young Depression-era poker player, as he seeks to establish his reputation as the best. This quest leads him to challenge Lancey "The Man" Howard, an older player widely considered to be the best, culminating in a climactic final poker hand between the two. The script, adapted from Richard Jessup's novel, was written by Ring Lardner Jr. and Terry Southern; it was Lardner's ... more on Wikipedia

The Cincinnati Kid IS LISTED ON

anime about cells, sirius the jaeger netflix, all american actors, celebrities who wrestled in high school, mac and me cast, Guardians of the Galaxy Quotes, varieties of m&ms, italian series on netflix, ruffles chips flavors, best indie movies on netflix