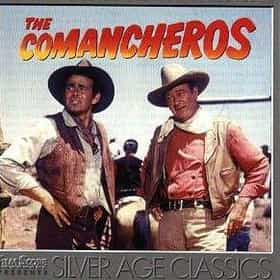 The Comancheros is ranked on...

#59 of 394 People who voted for The Comancheros... also upvote James Arness on The Greatest Western Movie Stars also upvote George "Gabby" Hayes on The Greatest Western Movie Stars The Best Western Movies Ever Made 370.8k VOTES The best Western movies ever made include some true classics from the early days of cinema, and more modern day films that c...
#15 of 112 The Best Movies of 1961 2.9k VOTES List of the best movies of 1961, with movie trailers when available. 1961 saw the debut of many historic actors, including...
#19 of 46 The Best '60s Action Movies 1.4k VOTES Are you a fan of action movies? If so, you’ve come to the right place. This list of the greatest 1960s action movies is full...
#3 of 5 The Best Movies Directed by John Wayne 610 VOTES List of all movies directed by John Wayne ranked from best to worst with photos. Films directed by John Wayne are listed her...

The Comancheros is also found on...