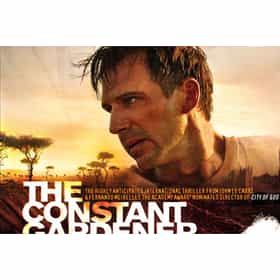 The Constant Gardener is a 2005 drama thriller film directed by Fernando Meirelles. The screenplay by Jeffrey Caine is based on the John le Carré novel of the same name. The film follows Justin Quayle, a British diplomat in Kenya, as he tries to solve the case of his wife Tessa, an Amnesty activist, alternating with many flashbacks telling the story of their love. The film also stars Hubert Koundé, Danny Huston, Bill Nighy and Donald Sumpter. It was filmed on location in Loiyangalani and the slums of Kibera, a section of Nairobi, Kenya. ... more on Wikipedia

The Constant Gardener is ranked on...

The Constant Gardener is also found on...