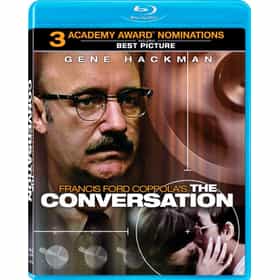 The Conversation is a 1974 American psychological thriller film written, produced and directed by Francis Ford Coppola and starring Gene Hackman with supporting roles by John Cazale, Allen Garfield, Cindy Williams, Frederic Forrest, Harrison Ford, Teri Garr and Robert Duvall. The plot revolves around a surveillance expert and the moral dilemma he faces when his recordings reveal a potential event. Coppola cited the 1966 film Blowup as a key influence. However, since the film was released to theaters just a few months before Richard Nixon resigned as President, he felt that audiences interpreted the film to be a reaction to the Watergate scandal. ... more on Wikipedia

The Conversation is ranked on...

The Conversation is also found on...